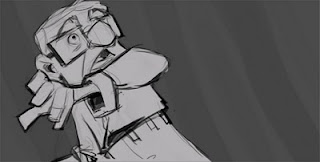 I recently had the opportunity to check out Derek Thompson's Gnomon DVD on storyboarding, and thought that his working method with layer comps was really interesting. I wanted to do a test run of his method before committing to it for my storyboard reel, and this is the result. Unlike digital painting, digital drawing on a wacom tablet is still awkward and clunky to me. Maybe I'll try it with my tablet PC as soon as I get some protective screens for it.

Speed was my main focus here, so it's definitely a little sloppy. I think I read on Rad Sechrist's blog that he did 100 boards in a day. If that's about standard in the feature animation biz, then holy shit.

*EDIT* accidentally wrote Dermot Power instead of Derek Thompson, sorry about that.
Posted by Danny Araya at 3:30 PM 4 comments: 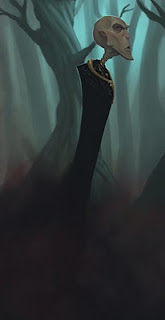 I know it's cool to say "I don't like Harry Potter" now, but I really did enjoy the books. What I did NOT like was the portrayal of Voldemort in the films. I always considered him to be really regal, and I thought that his sense of royalty was borne out of an intense vanity. He wants to be feared because he wants to be important, which is a very childlike quality and a big part of why I like the character. There's a scene in one of the books where Dumbledore keeps calling Voldemort by his real name Tom, and "Tom" has a small tantrum and insists he be called by his new name. It humanized the shit out of the character and told us everything we needed to know about who he was and why he turned out the way he did. I appreciated that, and tried to illustrate that self-importance here in this off-the-cuff doodle.

Also, a group of animation industry veterans have banded together to create this amazing educational, FREE blog. go learn something:

I've been noticing a problem in how I approach the beginning stages of a design or an illustration. For a long time I've blindly meandered my way through designs and compositions, my mind always hazy or blank when it came to pre-visualizing something. Often it wasn't until halfway through a design (after I'd done my obligatory thumbnails and started the final rendering) that I decided whether or not I liked what I was working on. After a few years of working this way, I finally realized what my problem was. Those obligatory thumbnails.

The thing I learned from training videos, articles online, and all through art school, was that I was supposed to produce a generous amount of thumbnails before moving on to the final product. I did as I was told and I was almost always frustrated at the result. I just couldn't comprehend the fact that some artists use thumbnails to think. They form their ideas through these tiny drawings and keep going until they hit something that they like, making decisions and refining ideas as they go. What I noticed about myself is, I DON'T THINK WHEN I DRAW.

I'm just not one of those people who can develop an idea as I'm drawing. When I draw it's only to execute an idea I already had in mind. If I want to stop and evaluate a drawing, or decide what direction I should be going, then I have to STOP and evaluate it. So if I'm coming up with a character design, or figuring out how I'm going to compose a dramatic scene, then I have to take some time to day dream, and THINK, and imagine. It usually helps if I jot down a few notes about what I'm trying to accomplish. Am I going for a goofy character? A stoic character? A submissive weakling? Is the scene I'm drawing dramatic? Is it grand and imposing? Is it a moment of revelation? Once my goal is clear and defined, I close my eyes, or put on some music, and let my mind run around for a while. Or I go take a walk. Or for you smokers, this would be a good time to have a cig. Or take a shower. This is when the ideas flow. And THEN, after all that, it's time to thumbnail the ideas. At this point I usually have a clear goal in mind and it doesn't take very long to figure out the best way to execute it. The result is only a few thumbnails just to iron out a few kinks. I've found that this approach works best for me. A ton of thumbnails is next to useless for me, (except maybe to generate random shapes which is sometimes a useful exercise). It just goes to show that different approaches work for different people. This is an easy thing to remember, and something that we often forget.
Posted by Danny Araya at 5:53 PM No comments: 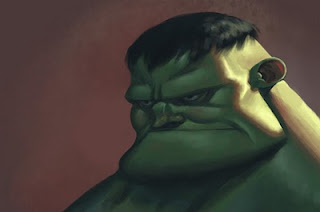 Random photoshop doodling from last night. Didn't have anything in mind, I just let my hand start scribbling
Posted by Danny Araya at 10:29 AM 3 comments: