Over the past year or two, I've been made painfully aware of just how many movies I should have seen, but haven't.  This is pretty ridiculous for someone with the aspirations that I've got, so to rectify this and to expand my cinematic IQ, I've decided to go through the AFI Top 100.    Here are the movies I've watched so far

I also saw Yojimbo Sanjuro, and the Seven Samurai which I feel should be mentioned as part of a list that all storytellers should see.  A few of those movies I had seen before, but the majority of them are all new to me.  I think it's interesting that the film I enjoyed the LEAST out of that list was Raiders of the Lost Ark, which I'm sure must be blasphemous to a lot of people.

I think I'm going to have to go back and watch a lot of these movies a second time to try to take them apart and do my best to analyze them.
Posted by Danny Araya at 2:13 PM No comments: 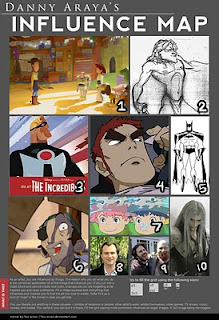 I thought this was an interesting and useful exercise.  Here's a little info on my choices:


1. DICE TSUTSUMI - Brilliant painter currently working at Pixar. I love his lighting schemes and have been totally ripping them off lately.2. GLEN KEANE - The weight, fluidity, appeal, and gesture in each of his drawings is insane.3. BRAD BIRD - The Incredibles is my favorite of his movies, and in general I think he's my favorite director in animation right now.4. GAINAX - Specifically FLCL, Gunbuster2, Tengen Toppa Gurren Lagann. Awesomely dynamic stuff.5. BRUCE TIMM - He might have come up with the perfect simplification for animated super heroes.6. GOBELINS, l'école de l'image - All the shorts coming out of that school have been absolutely ridiculously amazing. 7. HAYAO MIYAZAKI - I know it's blasphemous to say this, but Miyazaki's movies really had to grow on me because I was NOT a fan at first. My initial impression was that his movies went off on long, slow, unrelated tangents and that his endings were too "deus ex machina" as a friend of mine put it. I still feel that way about some of his movies, but the charm, whimsy, and complexity of his characters have won me over. 8. CHRISTOPHER NOLAN - Brilliant writer/director. There's not much that needs to be said really, I'm sure everyone has seen Dark Knight and Inception. I REEEEALLY like The Prestige though, and it may be my favorite of his movies despite that ending.9. EDGAR WRIGHT - BRILLIANT writer/director. His sense of comedy and story are just absolutely amazing and I love that even though his movies are comedies, they have a surprising amount of heart and depth to them. He creates parodies without being condescending or pretentious, and he has these constant "loops" in his movies where dialogue from the beginning is repeated at the end under completely different circumstances. Hot Fuzz and Shaun of the Dead are each so densely packed with hilarious scenes and really clever little lines that it always amazes me. I've seen both movies so many times I could probably talk along with the characters on screen.10. FINAL FANTASY VII - This game DEFINED my middle school years and has had a huge hand in influencing my aesthetic sensibilities. I never really let go of the giant weapons/high tech/swords and sorcery stuff that this game introduced me to.
Posted by Danny Araya at 8:56 AM No comments: 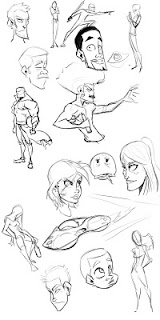 Randomness done today in Photoshop with a Wacom Bamboo Fun. I gotta get me one of them fancy cintiqs one day.
Posted by Danny Araya at 10:19 PM No comments:

Because Hobos are Awesome 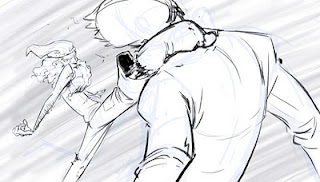 Anyone who knows me knows how much I love drawin hobos.
Posted by Danny Araya at 7:23 PM 3 comments: 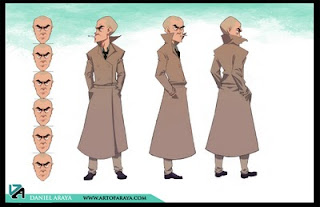 The main character of the new set of boards I'm working on.
Posted by Danny Araya at 8:14 PM 2 comments:

I should start by saying that I went into this movie after hearing all the negative reviews about it, so my expectations were pretty low. I immediately assumed that people were unfairly comparing Goro Miyazaki's debut film to his father's masterpieces, and I found this extremely unfair considering how much experience in animation Hayao Miyazaki had before he directed his first full length feature film. I chivalrously defended the underdog in my mind, and I turned on the movie having made up my mind that I was going to enjoy this story.

About halfway through the movie, I realized that Hayao Miyazaki was absolutely right in criticizing his son when he claimed that Goro didn't have the experience necessary to direct a feature film.

It shows. it REALLY shows. All the mistakes made were incredibly basic storytelling mistakes for which I think there was no excuse. I've often heard this movie described as feeling superficial, and I think that's a really accurate description.

Throughout the story, stuff just kinda happens, which is because there is very little motivation (if any) for the characters' actions. They just do stuff and go places for no real reason for the entire first half of the movie. They're just walking, talking plot propellers that deliver really stilted dialogue, even when taking the cultural differences into consideration.

Another ENORMOUS problem is that the protagonist is so dispassionately reactive to everything, it's really hard to give a damn about him. Things will happen to him, characters will do stuff, you really won't care about any of them and halfway through you still won't know what the hell the movie's even about.

Visually it's fantastic, with Ghibli's gorgeously painted backgrounds.  I even like the throwback character designs. They look more like the older, Nausicaa style of design and less like the more recent Spirited Away/Ponyo stuff (which I still like). The animation is great compared to most other studios out there, but kinda weak when compared to other Ghibli animation. The main reason I say that is because there's very little in the animation that demonstrates the characters' personalities. The expressions and movements are kinda generic and it feels like you could swap one character's animation and put it on another and it wouldn't make much difference. What I always admired about Ghibli movies is Miyazaki's hyper attention to detail in the character animation, insisting that characters move based on how they're feeling and what their personalities are. This is kinda rare in anime and it's something this film unfortunately lacks, which isn't surprising given Goro's insistence on staying out of the family business.

There are some cool action sequences which will do their best to hold your attention, but otherwise the movie's a little disappointing. If Goro Miyazaki ends up writing/directing another movie, I hope father and son won't be at eachother's throats as much during production and Goro will actually work with his father and take his advice.

*EDIT* I also want to add that the English Dub casting was really good, and Timothy Dalton did an awesome job, especially given the limitations of the script.
Posted by Danny Araya at 10:18 AM 1 comment:

Gotta keep the devil way down in the hole

I've been getting a bit bored with rendering all the time, so I'm kinda deviating from that for a while and trying something a little different. This is another doodle I got carried away with. I've had the Boondocks and the Wire in my head for a week or two now, so I guess this is me getting both out of my system. Tried to capture the feel of the Wire while I was on a high from Seung Kim's incredible work.
Posted by Danny Araya at 8:31 PM 2 comments: