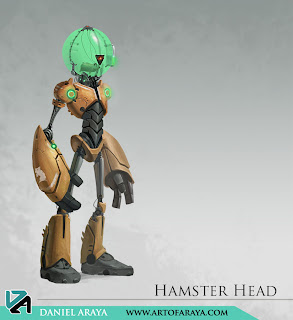 A friend of mine, former classmate, and unfairly talented modeler named Bakia Parker is modeling the hamster head bot guy that I painted. Go look at it RIGHT NOW.

ALSO, I just finished both Ender's game quartets (which is what? an octet? I just made that up but it sounds right) and enjoyed them for the most part. I thought there was going to be more of a bridge between the two sets, but I suppose not. For example, is the virus that Volescu made supposed to be the beginnings of the descolada? Do they ever address the fucking alien planet at the end of children of the mind? Are they unwittingly returning to earth, mistaken in their belief that the descoladores are aliens? Is Bean's genetically engineered condition the origin of the Chinese people of Path in Xenocide? Wtf Orson. Give me closure man.

Man that banner is terrible, I don't look anything like that.
Posted by Danny Araya at 11:48 PM

there is another book yet to come out that is going to bridge the two series. Its called shadows in flight

well thanks for that info! I had no idea